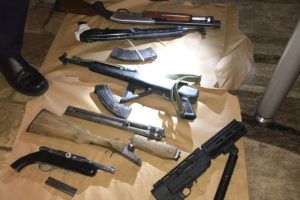 In the wake of capturing 11 people for their supposed inclusion in a gathering conflict in Bhuj, police swung energetically and recovered an extensive number of arms and weapons in the wake of doing seek tasks at the living arrangements of the denounced. From the living arrangement of Mujahid Hingorja at Azadnagar close Salfia mosque, we seized four swords, one sickle, two tomahawks, and 10 blades, while we got three blades, one grass shearer and one compressed air firearm from the place of Alimamad Bafan, said authority from Bhuj B division police headquarters. As both the blamed have mocked notice about the disallowance of arms, they have been reserved under segment 135 of Gujarat Police Act, the authority included.